It’s not that I’m a coffee snob, it’s just that I appreciate—and love—a good-tasting cup of coffee. Which leads me to the saga of finding the right grinder for the job.

Many years ago, in the days when I bought pre-ground coffee, I admired the antique coffee grinder that hung on my partner’s kitchen wall. It never occurred to me to actually put some beans in it and see if it worked. I just assumed it didn’t.

Years passed. We built a little cottage in the bush. The grinder came too and continued to hang on the kitchen wall.

Wishing to reproduce a decent espresso in my own home, I purchased an espresso machine. Success. Then I wondered if freshly ground beans would improve things even more and began researching grinders. You know—not electric, even grind …

Doug said: ‘I reckon I could get that old grinder going again. It used to be good in its day’. Now why didn’t I think of that!

Success, again. With its fine-tuned adjustment, I was able to produce exactly what was needed.

Wind the clock forward 10 years, and Doug’s cousin, Judy, was visiting. (They had actually been friends for many years before discovering they are related—but that’s another story.) She saw our grinder and said: ‘Dad used to own one of those! It was blue. I wonder where it got to’. They began reminiscing and discovered that both their parents had purchased their grinders at the same time, in Holland, in 1953.

Wind the clock forward another 10 years. Doug and I were walking through an Aladin’s cave of a second-hand shop in Yackandandah, Victoria (a very long way from home) where, screwed to the wall, was a blue coffee grinder, just like ours. I rang Judy. Did she want it? Yes!

Now, I know this is a long shot, but just supposing only two of these grinders ever made their way from Holland to Australia, and just supposing Judy’s dad sold it to someone in the second-hand trade. Wouldn’t it be a neat ending to the story, if it had come home? 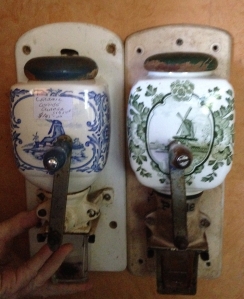