With temperatures like this, it is vital to be prepared. In fact, it is life threatening if you aren’t. My first impulse, when planning my journey during the heat of mid-summer Brisbane, was to dig out all my warm clothing and just add what was needed. I went through the snow gear of my son and daughter-in-law, Glenn and Emma, but found that skiing in the alps requires different clothing from walking on ice.

I walked into the Paddy Pallin store in Brisbane and a young man asked if he could help. I said I was preparing for a trip to Antarctica, (although I still couldn’t believe it was actually happening). He was heading to the Himalayas, which meant he knew exactly what I would need. It was critical to try the whole kit on before settling on sizes. The more layers, the larger the next garment needs to be. Just imagine climbing into all I was taking in a small dressing room in 30-degree heat!

By the time I left the store, my wallet was considerably lighter, but I trusted his judgement. Wisely, as it turned out. All those warmies I already owned and had planned to take? Only the beanie and the Polartec® jacket proved worthwhile. Forget about bulky warm coats. The secret to success is layering. Many layers. And, so important, never have cotton next to your skin. If you sweat, the moisture turns to ice. Imagine finding a slab of ice inside your shirt. It did happen.

So, this is what I took with me: 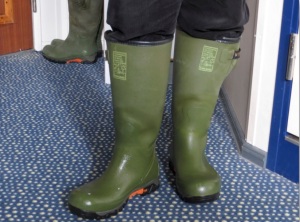 I took three different gloves with me,as well as liners, and they each had their use.

In choosing the waterproof layers, there were certain features that made life much easier. Thinking and moving take on different dimensions when you are being hit by a blizzard. My coat had a large pocket on the outside of the left-hand side with an easy-to-operate zip with long toggle. Being right-handed, this was a plus. It was capacious enough to contain my digital camera and camcorder, although it needed to be zipped up all the time, as I found to my cost. On two occasions I dropped both cameras, being in a rush to film, then bending over without zipping the pocket closed.

The coat zipped right up to my nose, which was good at keeping out the wind and snow, but made it more difficult to breathe and fogged my glasses. I had to pull it down to take a breath, then zip it up to get warm again. The coat also had a velcro tab at the back of the neck, enabling easy adjustment of the front peak over my forehead. It had two deep pockets below the waist, but if I carried anything in these, it inhibited leg movement. I had chosen a long coat down to my knees which was terrific when sitting on penguin poo-covered rocks, but I had to leave the zip open at the bottom, again, for ease of leg movement.

I remained completely warm and dry with the above combination, although my hands were a little chilled at times. The only time I experienced moisture inside was when I wore a cotton skivvy. All other clothing wicked the moisture out.

And on top of everything went the life jacket. I could barely move once it was strapped on. However, we were not allowed to go off the ship without it, and a complete waterproof shell from head to toe. Pride took second place.

Read all about my 2013 Antarctic expedition in my ebook:

Why Antarctica? a Ross Sea odyssey