Today, I plucked a posy of small but perfectly formed roses and placed it in the centre of my dining table, just as my aunty and grandmother had done for decades. What makes this posy special is that it comes from the same plant that supplied their posies. 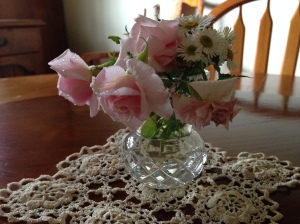 Back in the 1920s, my grandmother, Mary O’Leary (yes, the same Mary O’Leary who features in my novel, Union Jack) admired a rambling rose grown by her neighbour and asked for a cutting. The Cécile Brünner grew, along with Mary’s children, and her house filled with the wonderful perfume of the roses.

Mary’s husband died—tragically and far too young; her eldest child left home, rarely contacting his mother; her two daughters married during World War II. My mother moved out when her husband returned at the end of the war, but my aunty and her husband remained in the family home.

During the 1950s, Mary sold the family home and my aunty and uncle purchased a new one, taking Mary and a cutting of the rose bush with them. Aunty Madge continued the tradition of cutting the tiny dark-pink buds which open to a full-blown pale-pink rose within a day. Whenever I walked in her front door, I smelt the familiar perfume.

Years passed. My sister, Beverley, and her husband were visiting Aunty Madge when David, admiring the perfect flower, suggested they should take a cutting—in case aunty’s bush died.

More years passed, and my own daughter set the date for her wedding. Beverley and I gave her a kitchen wedding shower, and Liane opened the useful gifts we all brought—we laughed at how boring most of them really were. Beverley disappeared from the room, then reappeared nursing a pot with a small rose plant. She had struck another from our grandmother’s Cécile Brünner.

All this time, I had loved the rose, but had never owned one myself. Twenty years after my daughter’s wedding, I took cuttings from her plant, and now have three healthy bushes of my own that reward me with posies for my dining table. My son, Glenn, and his family have just moved into their first home. This year’s prunings are in potting mix…

This story has one final twist. The neighbour who supplied the first cutting to Mary was the aunty of my children’s father.